I was sitting in my studio looking at the new frame now adorning my latest work, a large triptych titled “The Falls of Esgalduin” inspired by Tolkienʼs ʻThe Silmarillionʼ. I was considering what if anything I should do to celebrate my up coming 30th anniversary with the music industry. Having the knowledge that Amon Amarth were once again to grace the main stage at Bloodstock it seemed a perfect opportunity to embrace my worlds of Art and Music. 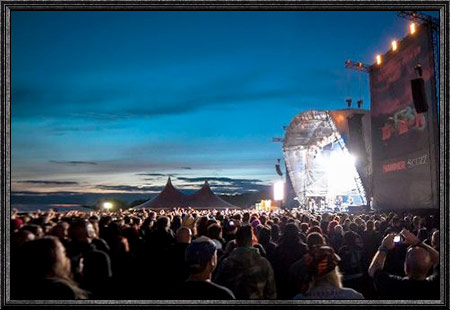 Amon Amarth took their name from Tolkienʼs ﬁctional universe, a Sindarin name meaning Mount Doom. Many bands have taken inspiration from Tolkien, including bands I have worked with such as Blind Guardian and Dio, although Dioʼs inﬂuence could be my interpretation given his work. The list of bands that credit Tolkien as inspiration is huge, Led Zeppelinʼs ʻRamble Onʼ has a reference in the lyrics to Tolkien and specifically Mordor.

I now want to create a permanent venue for Art and Music so to that end Iʼve decided to hold an art exhibition of some of my work at Bloodstock in 2014. This will be the start of my next journey. Iʼm creating a new work for the exhibition the canvas for is already in my studio awaiting inspiration, the title however will be Mordor Festival. The size of the canvas 72 x 120 inches (183 x 305 cms).

I’m a great believer that one thing can lead to another if you can be bothered to connect the dots. I started my journey with fantasy art many years ago, way back in the 70’s, yes I am that ancient! It was a photo of one of my Tolkien inspired works ‘The Ride of the Rohirrim’, that found it’s way to Saxon’s manager in 1983, I was then asked to create the stage design and album cover for their next album. The album (CRUSADER) was released in 1984, to date I’ve  had the privilege of creating 14 covers for the band.

In 2000 I became co-founder of Bloodstock festival, this again was as a direct consequence of my artwork. I believe now nearly fourteen years from the festival's inception is a good time to take my next journey.

Ride Of The Rohirrim 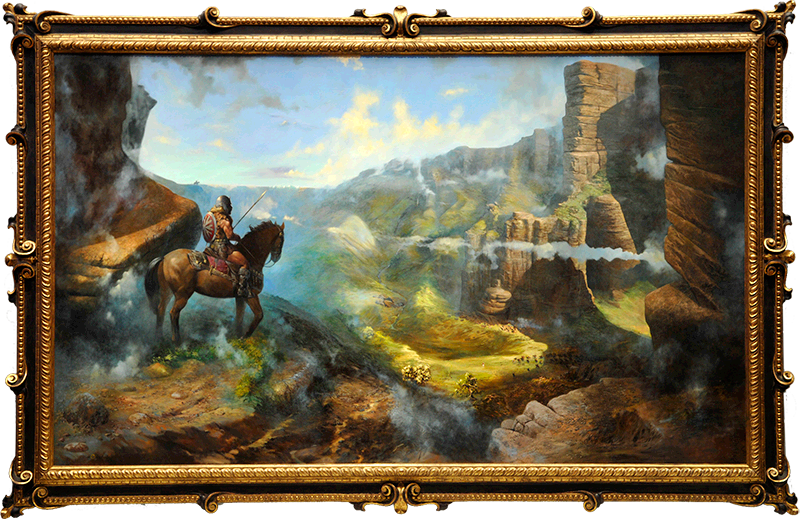 The Falls Of Esgalduin 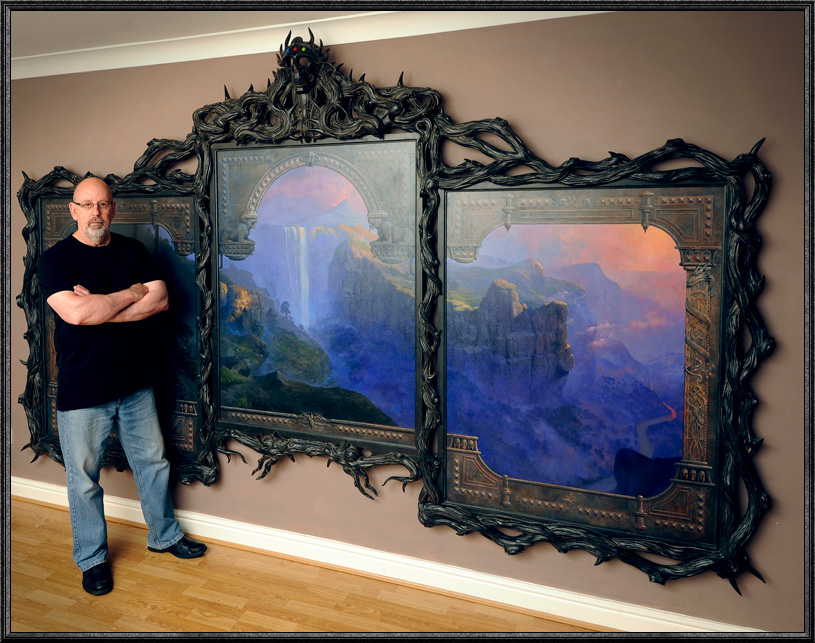 Bespoke Frame For The Triptych

A collaboration between artist and master framer.

This large Triptych was inspired by The Silmarillion and has been a work in progress for many months. Finally the bespoke frame arrived and is now hanging in my studio along with the paintings.

The frame was designed by me and built by the master carvers at John Davies Framers. The painting is due for exhibition along with several other works by Paul Raymond Gregory in 2014. http://www.johndaviesframing.com/the-falls-of-esgalduin/ 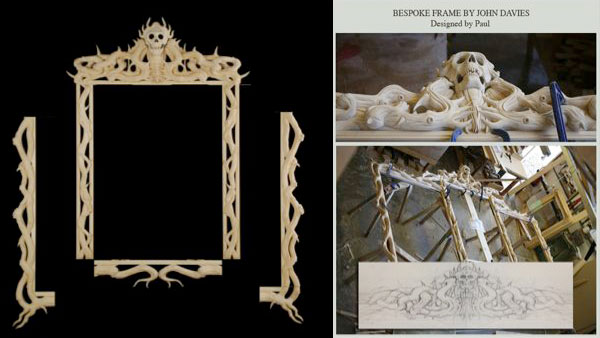 Most of the frames for my Tolkien Inspired works have been a collaboration between Peter Nahum and John Davies the framer. The Triptych 'The Falls Of Esgalduin' however is owned by my studio and the frame was designed by me and built by the craftsmen at John Davies Workshop.

The frame Mordor Festival will see a greater collaboration as the project will be sponsored giving the opportunity for all those involved to have their logo/name as part of the frame.The sponsors will be in the festival program, on the festival website, on Studio54's website.

The sponsorship for this initiative will see the start of my next journey and the creation of a truly unique project.

When I started my Journey as an artist I never considered the possibilities this could present. I was married young and itching to leap headlong into the lottery that is life. My first major leap of faith was to create my own gallery, something that was achieved along with my understanding wife Penny who not only went along with the insane idea to live in a caravan whilst I organized renovating two dilapidated cottages but also my dream of owning and running a gallery. The gallery was a great success and we held many memorable exhibitions over the years. Eventually we sold the gallery to allow me to concentrate on my own work.

I started my Journey with Tolkien in 1976 completing the first major canvas in 1978 titled “The Ride of the Rohirrim”. At about this time I had the good fortune to make the acquaintance of Peter Nahum, Peter was a director of Sotheby’s at the time and organized a tour of my work throughout the UK. On leaving Sotheby’s in the early 80’s Peter set up his own Gallery in London http://www.leicestergalleries.com/ it was then Peter purchased the “Ride of the Rohirrim” and to date has acquired most of my Tolkien inspired works.

In 1983 I had my first album cover commission, the band was Saxon, this was as a direct consequence of their manager seeing a picture of one of my Tolkien works and my second leap into the unknown. I have since created 14 covers for the band including Battering Ram 2015 and Eagles and Dragons 2016.

Several years later and again as a direct consequence of my artwork but this time my album art, I was presented with the opportunity of putting on a festival, the festival was Bloodstock and the rest as they say is history.

Having established that one project can lead to another I now feel the time is right to embark upon my next journey. Bloodstock is now well established and recognized as a leading light within the metal fraternity, Bloodstock has from its inception supported young bands and has the biggest initiative for the next generation of the genre in the UK with it’s Metal 2 The Masses and New Blood stage.

As all of the above started with my artwork, it’s my intension to revisit my past whilst embracing the future. My next idea is to bring both the music and art I love under on roof. 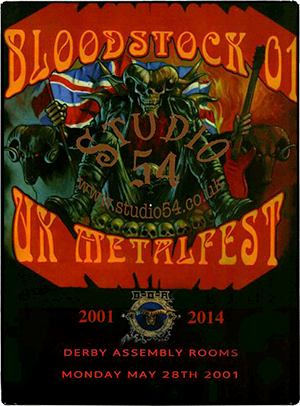 Mordor Festival
The Next Journey 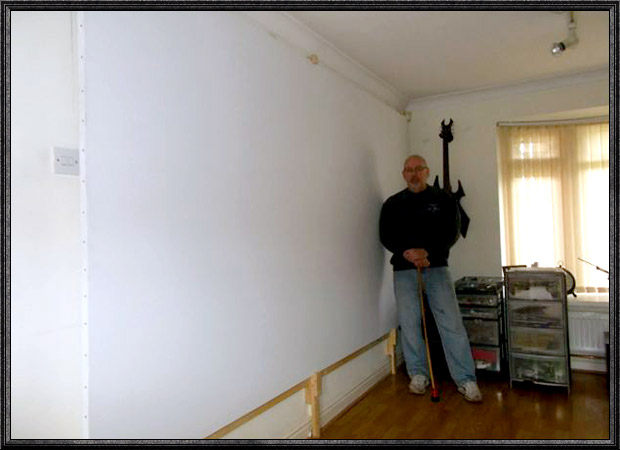