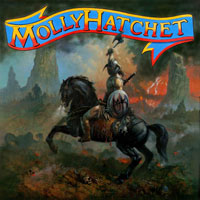 Molly Hatchet’s latest cover, Justice, my seventh for the band the first being Devil’s Canyon in 1996.

June 1st, 2010 marks the release of MOLLY HATCHET’S latest studio effort Justice. The album has been receiving rave reviews and the new songs are being heralded as instant classics. In celebration of the release of the album MOLLY HATCHET has been named PureSouthernRock.com’s band of the week. With a North American tour lined up for this summer MOLLY HATCHET are ready to unleash their own brand of Justice upon everyone.

To Bobby Ingram, brain, guitarist and main songwriter of American Southern rock act MOLLY HATCHET, the term ‘Justice’ is more than just a word. To him, this basic concept expresses his whole philosophy of life. Justice, fairness, trust between friends, family members, parents and their children: what could be more important? MOLLY HATCHET live this maxim, to them this solemn promise applies not only within the international Southern Rock community, but also to their music and its impact on their fans. Yet Ingram saves himself any kind of self-assessment, leaving the verdict on MOLLY HATCHET’S latest offering, Justice, to his audience. “Have we evolved as a band? Have we become better? Stronger? These are questions that everybody should answer for themselves when they have listened to our new album. I’m sure that the clarification of this matter will turn out in our favor.”

Ingram’s confidence, his joy and his pride in the new material on Justice are well warranted. A dozen rock numbers prove that MOLLY HATCHET are justly considered to be on par with legends such as Lynyrd Skynyrd and the Allman Brothers. Justice is marked by hot Southern Rock that is exceptionally powerful and diverse. Almost every single track signals its musical and thematic direction. As front man Phil McCormack unmistakably sings on ‘American Pride’: “Got that American pride with that southern style, born and bred something deep inside.” And the title track is pretty much representative of the whole album: “We need some Justice to make the wrong into right.”

At the same time, MOLLY HATCHET don’t just broadcast these type of statements, they fill them with altruistic commitment, the most impressive example being ‘Fly On Wings Of Angels (Somer’s Song)’, which is based on a true story. MOLLY HATCHET have dedicated this haunting track to seven-year-old Somer Thompson from Florida, who was abused and brutally murdered. Without a second’s hesitation, Ingram and the band supported Somer’s parents when they needed help, by playing a charity concert to raise money and informing the public about the tragic events. As a listener, you can’t help but be moved when you hear Somer’s sister Abby Thompson sing at the beginning and end of the track. “Coincidentally, a few days ago a prime suspect was arrested,” Ingram says. “The indications are that he killed her, but we will be fair and not prematurely judge him until all questions have been answered. That’s also part of true Justice.”

There are so many exciting aspects to discover on an album which presents MOLLY HATCHET (Ingram, McCormick, Dave Hlubek (guitar), Tim Lindsey (bass), Shawn Beamer (drums), John Galvin (keyboards)) at the pinnacle of their creativity. MOLLY HATCHET have recorded a true masterpiece; not only in terms of their compositions, but also in terms of its production, Justice leaves nothing to be desired. Producer Ingram is responsible for the awesome sound, supported by sound engineer Tommy Newton, who mixed the album. “I wanted a warm, natural sound, which you only get with an analog mixing desk,” Ingram explains his decision of working with Newton and his Area 51 studio. And so Justice has turned into an album which impresses at all levels: earthy, dynamic, with a lot of love for detail and loads of energy. You could say it’s MOLLY HATCHET at their best!