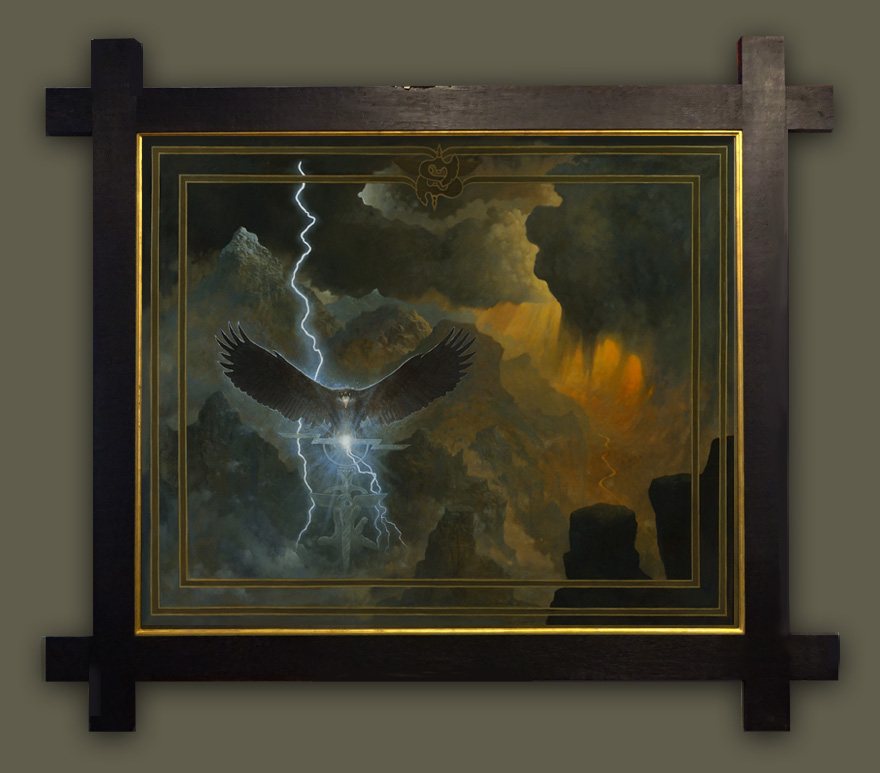 The artwork for Saxon’s latest studio album by Paul Raymond Gregory has been created on a much larger canvas than normal, similar in size to the cover he did for Rock the Nation (40 x 50 inches 102 x 127 cm).

The original artwork for ‘Thunderbolt’ Paul’s eighteenth cover for the band was first shown in the RAM gallery at Bloodstock in 2017. As part of the exhibition Paul decided to commission two Saxon inspired guitars by talented Luthier Cynosure who also films the build process http://www.rockandmetalmuseum.com/videos

The guitars and Paul’s huge and ever growing collection of original artwork will now form part of his next project to create a permanent venue for art and music. 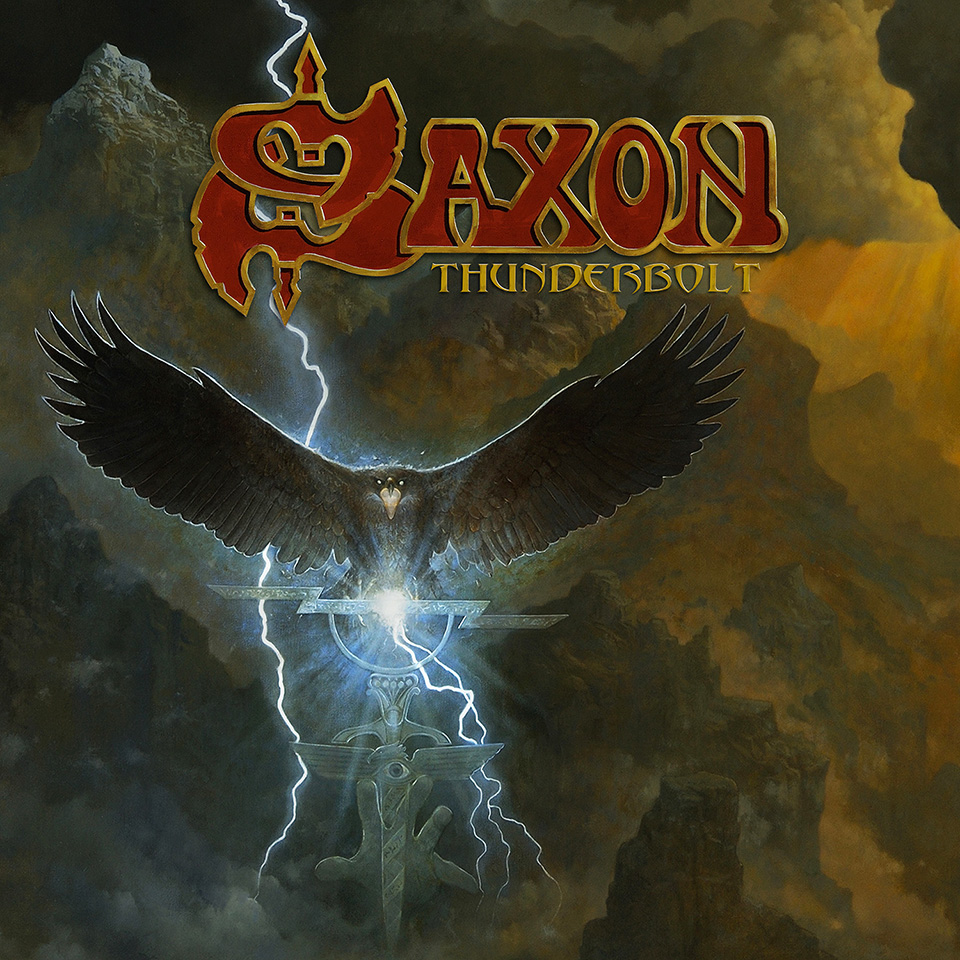 (Thunderbolt) yet another great album from my good mates Saxon. Creating covers for the band over the years has always been a privilege and great fun.

Thunderbolt is my 18th cover for Saxon roll on 30. 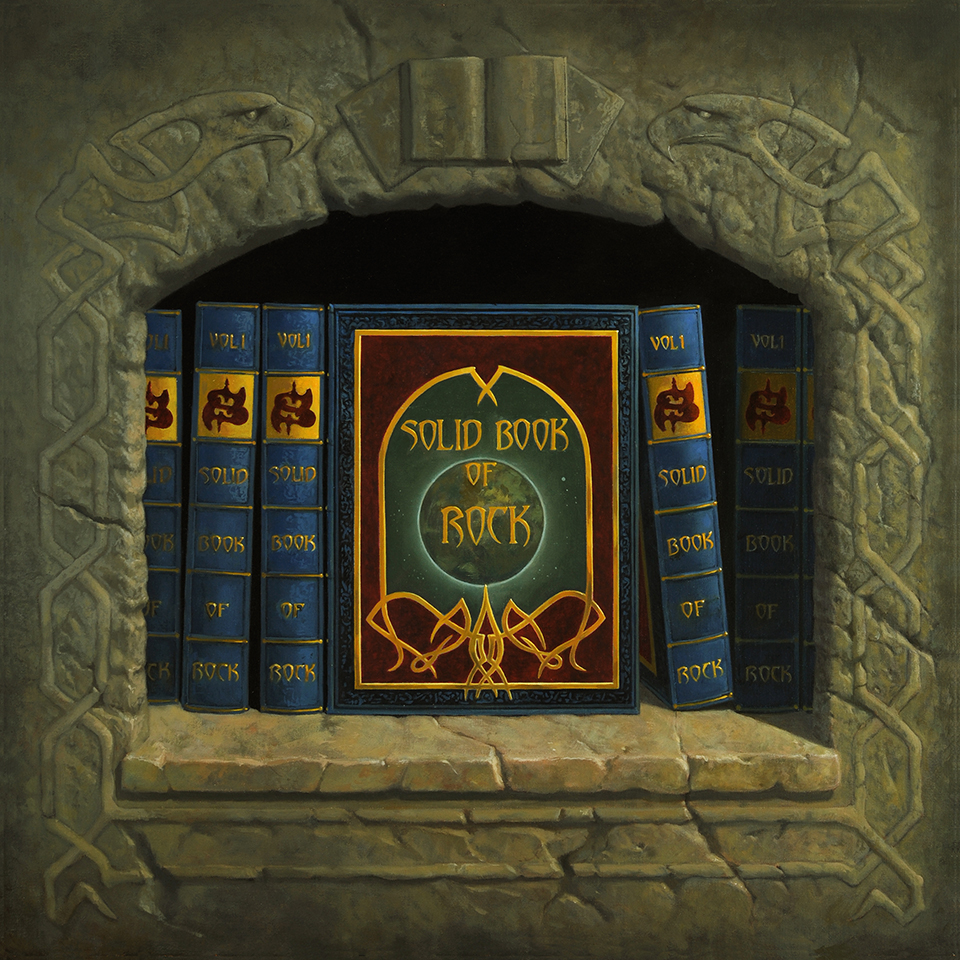 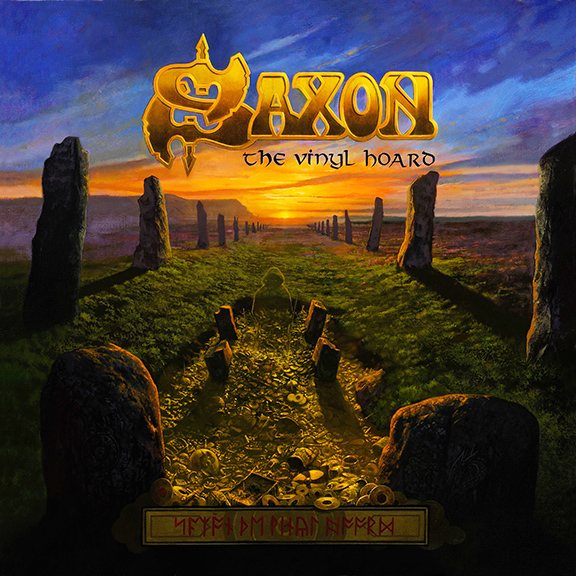 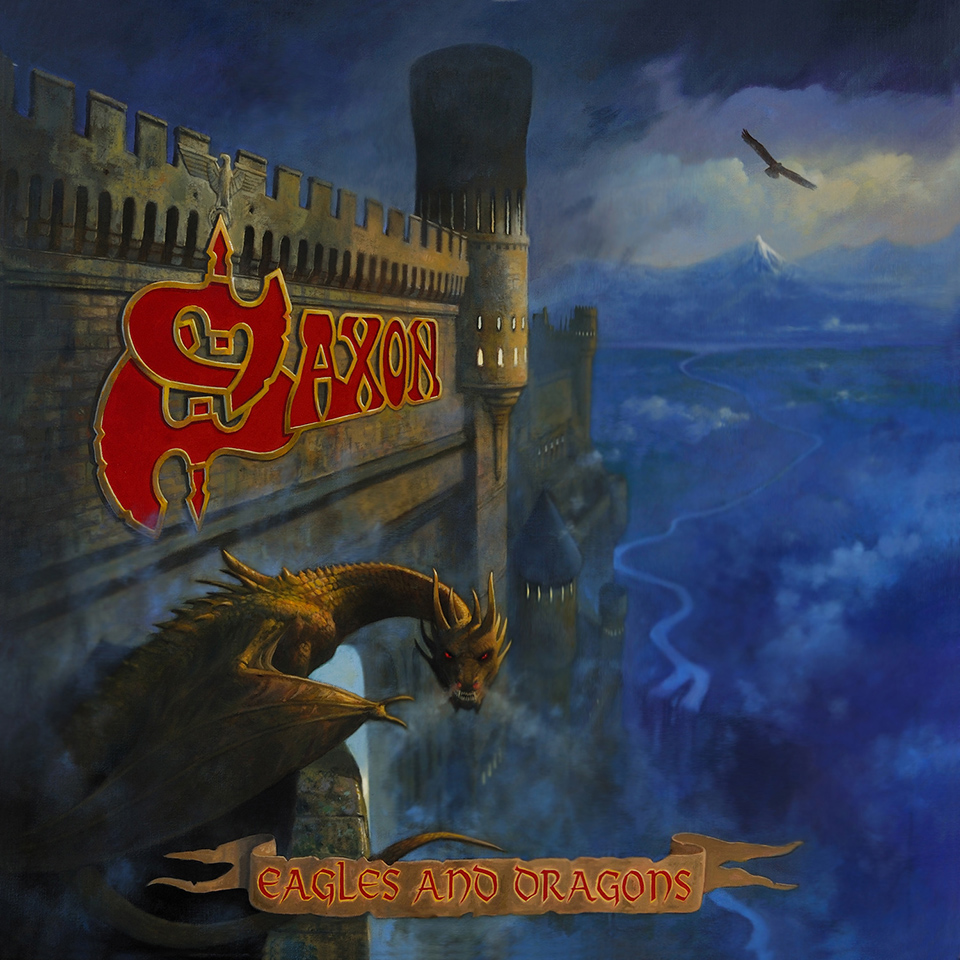 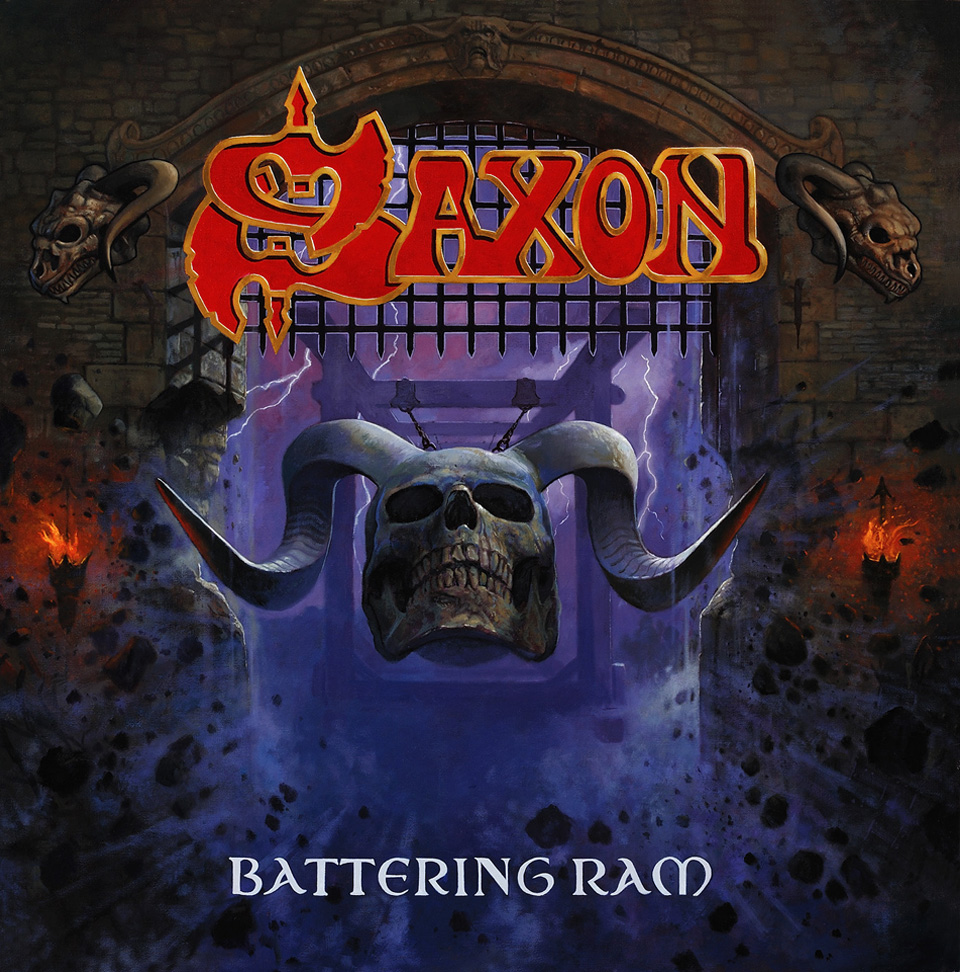 After paying a visit to my good friend Biff Byford Saxon’s indomitable singer I was delighted to be presented with their latest album “Battering Ram” my thirteenth cover for the band. On my journey back to my studio I played the album three times. The title track created a powerful image as did the Devil’s footprint and Queen of Hearts but the track that had the most impact for me was Kingdom of the Cross it reminded me of my Father albeit his nightmare was the second world war. 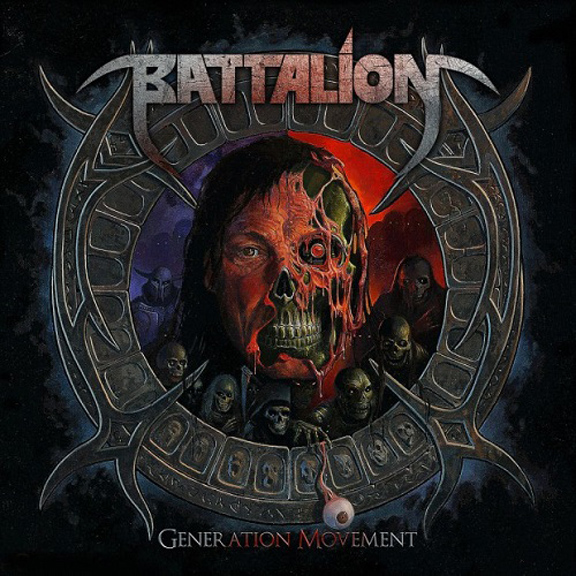 “Battalion” my third cover for the band and once again a great pleasure to work with. The original artwork will be on display at this year’s Bloodstock festival in the Rock and Metal (RAM)  Gallery. Battalion will also be playing the Sophie Lancaster stage on the Saturday. 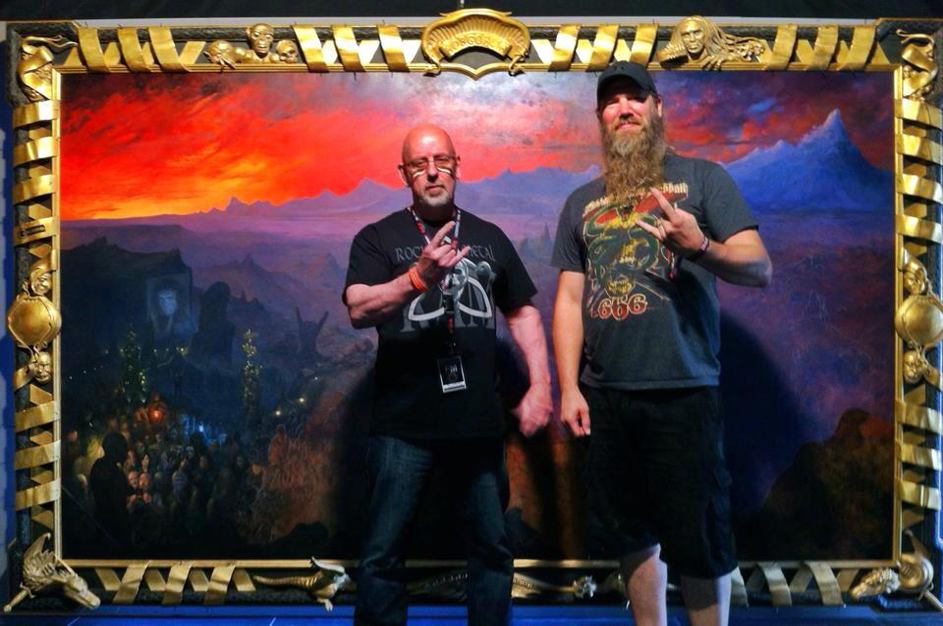 Well the dust has settled over another awsome Bloodstock and I’m now back in my studio working on my next projects. This will include the completion of Mordor Festival, the 120 x 72 inches (183 x 305 cms) canvas exhibited unfinished at this year’s inaugral Ram Gallery exhibition.I was a little concerned about exhibiting an unfinished work but given the reaction I’m glad I did, the completed work will be shown again at the Rock and Metal (RAM) Gallery at Bloodstock in 2015.

I’d like to take the opportunity to thank everyone who visited the gallery showing their support over the festival weekend. Seems it wasn’t such a mad idea after all. It’s my intention next year to develop the gallery even further.

The work of JRR Tolkien has long been a favourite muse of rock and metal artists.  This years’ BLOODSTOCK bands, MEGADETH, AMON AMARTH and DIMMU BORGIR all have used Tolkien references in their work, along with many others (Nightwish, Gorgoroth and even the likes of Led Zeppelin to name but a few).  Now Bloodstock’s co-founder, renowned fantasy artist, Paul Raymond Gregory, is thrilled to bring the two themes together and launch a major art exhibition at BLOODSTOCK this year.

Christened the Rock and Metal (RAM) Gallery, the exhibition is to be a permanent addition to the festival and will provide a showcase for a changing selection of rock-related art and memorabilia. Paul Raymond Gregory’s extensive body of work includes many famous album sleeves and monolithic pieces inspired by the writings of JRR Tolkien.  Paul’s first ever album cover commission was in 1984 for SAXON’s ‘Crusader’, so launching the RAM Gallery on the 30th anniversary of Paul’s artistic debut in the metal world is fitting indeed.

This year’s first showing will include all the original BLOODSTOCK Festival artwork, going right back to the first indoor event in 2001, plus a wide range of Paul’s album art including the sleeve of SAXON’s latest release ‘Sacrifice’.  Representing Paul’s Tolkien work, there will also be a large triptych inspired by The Silmarillion opus (from whence Marillion derived their name).  The painting will be mounted in a bespoke hand-carved frame created by master framer John Davis. Although John has framed much of Paul’s other work, the triptych features the first frame actually designed by Paul himself.  In addition, Paul will be signing copies of his book ‘Beyond Time And Place’, which showcases artwork from the breadth of his career.

The exhibition will also include a small selection of bespoke handmade guitars created by young artist/musician Cynosure who is working to re-define the guitar, not just as a functional instrument, but as a working, playable piece of art.  Paul firmly believes in supporting up and coming artists, as much as he does up and coming musicians (via BLOODSTOCK’s Metal 2 The Masses scheme).

The first BLOODSTOCK indoor festival featured a small art exhibition, but the new venture will be on an altogether grander scale, professionally hung, lit and housed in a specially constructed space of around 1300 square feet.  Ultimately, it is hoped that the exhibition will be the first step on the road to establishing a new permanent rock venue with Paul returning to his roots as an artist and gallery owner in support of both art and music.  The proposed site would include a live music space with bar, rehearsal and recording facilities, and a permanent exhibition space.  A true hub for British rock and metal in the heart of the Midlands; the TRUE birthplace of metal. 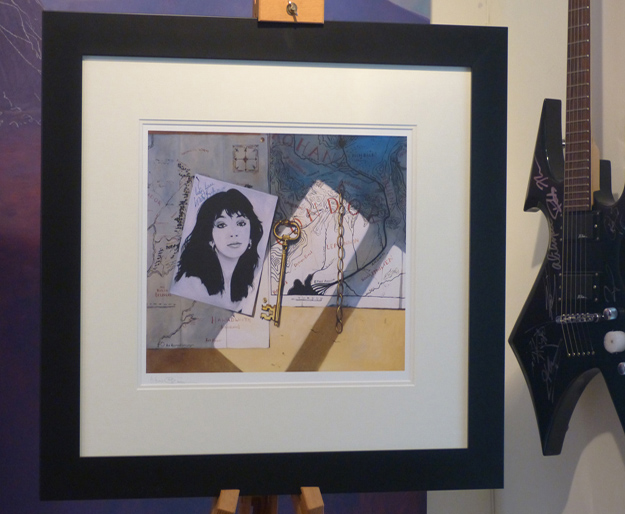