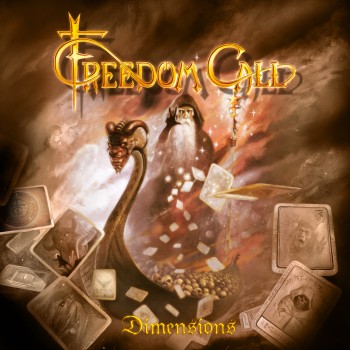 If you ask Freedom Call fans about the outstanding characteristics of their favourite band, they tend to list two main qualities: melodic and up-tempo. Both attributes will come to bear again on April 23, 2007 (Germany: April 20), when vocalist/guitarist Chris Bay, drummer Daniel Zimmermann and the two new additions, Lars Rettkowitz (guitar) and Armin Donderer (bass), release their current album, Dimensions, proving emphatically that Freedom Call are still among the most passionate and dynamic German metal acts.

Stylistically, Dimensions is a successful liaison of the group?s basic strengths and new, contemporary influences. Or, as Daniel Zimmermann puts it: “Even if the two predecessors, Eternity und The Circle Of Life, took very different directions, both albums had a number of strong moments. Dimensions combines the most successful elements from both albums, in other words: we included our penchant for fast and very melodic numbers from Eternity with the more contemporary, bombastic components of The Circle Of Life.” The album reveals that Freedom Call have found two talented songwriters in Lars Rettkowitz and Armin Donderer: four of the eleven tracks on Dimensions were penned by them, the other seven were written and composed, as usual, by Chris Bay and Daniel Zimmermann.

The eleven new numbers (plus intro) were recorded at the FC studios in Nuremberg, while the drum parts were cut at the Area 51 in Celle by Daniel Zimmermann with the support of Tommy Newton (Helloween, Kamelot, Victory), who also mixed and mastered Dimensions. The cover artwork was designed by Paul Raymond Gregory (Saxon, Molly Hatchet, Blind Guardian) and suits the thread of the lyrics to a T. The album raises the question where the climatic disaster will lead, what the fate of the human race will be, and whether our future may be not on earth but far away on another planet of the universe. Could a subject be more topical?

Freedom Call are scheduled to play four shows with Dragonforce around the album?s release date, followed by various summer festivals and an extensive European tour in Autumn.